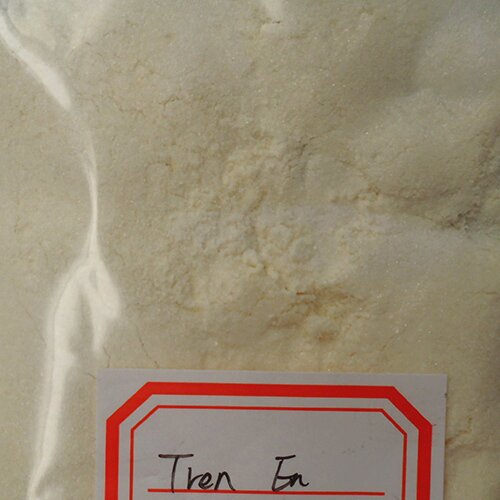 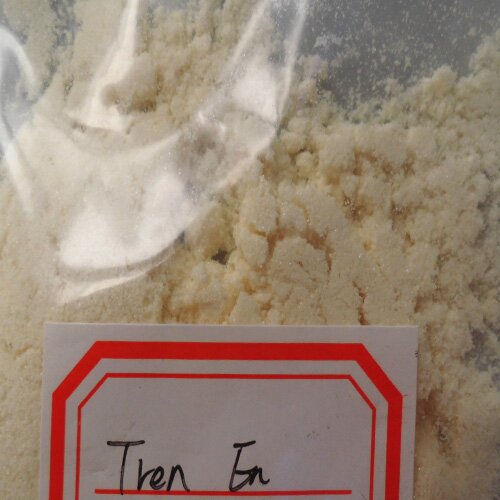 Trenbolone Enanthate is a long ester variant of the hormone Trenbolone. Trenbolone, being a derivative of Nandrolone (the base hormone in Deca-Durabolin), is a 19-nor anabolic steroid. 19-nor compounds are characterized by their lack of a 19th carbon on the steroid structure, which also brings Trenbolone the classification of a progestin as well. Through it’s modifications from Nandrolone, it introduces two double-bonds between carbons 11 and 9, and it is this chemical modification that effectively makes Trenbolone totally immune to aromatization (conversion into Estrogen) by way of the aromatase enzyme as well as increasing the strength at which Trenbolone binds to the androgen receptor. That is to say that Trenbolone will not produce any estrogenic side effects alone, and that it is an extremely potent and very strong anabolic steroid with an anabolic:androgenic ratio of 500:500. Compared to Testosterone, this is staggering, as Testosterone expresses an anabolic:androgenic ratio of 100:100. Hence, we can see how and why Trenbolone is five times the strength of Testosterone. Its chemical modifications also allow it a stronger resistance to metabolism in the body, allowing even more maximization of its anabolic capabilities in muscle tissue. Lastly, Trenbolone Enanthate possesses the enanthate ester, affixed at the 17-beta hydroxyl group on the steroid structure. This, as mentioned many times already, slows the release rate and also extends Trenbolone’s half-life in the body to approximately 7 – 10 days.

Trenbolone is well known for its ability to produce high quality, dry muscle gains as well as greatly increasing strength. And, unlike other powerful AAS’s, such as Dianabol, gains realized from this compound are easy to maintain once the cycle ends. You are more likely to retain gains made during a trenbolone cycle than you are with most other steroids of similar potency.   Other benefits include hardness, lack of water retention, inability to convert into estrogen, increase fat burning/loss, improved definition and increased aggression. These benefits make it a popular choice of both competition and recreational body builders alike.